Sanbona Wildlife Reserve
has many stories to tell

Some are ancient, others more modern; one is clearly evident in the reserve’s name. While rocks tell the older tales, the landscape depicts more recent history; both embody Sanbona’s essence and serve to guide the reserve’s plans for the future.

From unearthed Stone Age tools, archaeologists believe the region’s earliest inhabitants lived on Sanbona over 500 000 years ago. These hunter-gatherers were the San, who traversed this area of the Little Karoo for thousands of years. Being semi-nomadic, the San led simple lives following water and wildlife. They lived in harmony with their natural surroundings, treading lightly on the sensitive environment. The stories of their lives and passions are told through paintings and engravings on the walls of caves they inhabited.

LIFE FOR THE SAN changed completely about 2 000 years ago, when the Khoikhoi arrived from the north herding their Nguni cattle and fat-tailed sheep. The San were displaced and the Khoikhoi became the dominant people of the area. Yet all was amicable and the two groups integrated and lived together peacefully as hunter-gatherers and pastoralists, hence their collective name: Khoisan.

It was the migrant Khoikhoi pastoralists who were the first native people to encounter Europeans. They first met Portuguese explorers in the early 16th century, and all was well. Then, by the 1700s, Dutch settlers started pushing into the interior and onto Khoikhoi land in search of grazing for their own cattle. Conflict ensued and the Khoikhoi were displaced. In a bid to reclaim their traditional land, they waged frequent attacks on the European settlers, who had enclosed their traditional land as farms. Just 100 years later the Khoikhoi had been completely driven off their land, and their traditional way of life had been quashed forever.

As Europeans moved deeper into the interior looking for opportunities, their impact on the environment was dramatic. There were hunters and adventurers, ivory traders and colonial pioneers laying claim to land; opportunists were in large supply. Within 200 years – from the 18th to the 20th centuries – wildlife was completely decimated and the fragile land degraded by overgrazing and destructive farming methods. The area then became a seasonal grazing land for stock farmers.

Degradation of the environment further ramped up from 1850, when intensive agriculture started in areas previously considered economically unproductive. Then the Fencing Act of 1912 required farms to be fenced, and from 1922 these fences had to be vermin proof. In 1923 farmers were advised to subdivide their land into camps, stock more livestock and practise rotational grazing. The result was dire degradation of the natural environment and a change of vegetation in the Little Karoo. Entire populations of palatable plant species were lost, and by the 20th century the land was completely exhausted.

Linton Projects has a vision of a five-star hotel, Big Five reserve in the Western Cape and buys just over 24 000ha of wheat and sheep farmland. Call it Cape Wildlife Reserve and plan to sell corporate lodges to fund the project. Project fails.

Mantis Collection takes over the property and Sanbona Wildlife Reserve is born, based on the successful Shamwari model. An additional 54 000 ha of farmland were purchased, the infrastructure developed, wildlife introduced and rezoning of property and deproclamation of public roads traversing property begins. Tilney Manor is restored and opened as first lodge on Sanbona.

Sanbona entered into a Biodiversity Stewardship programme together with Cape Nature. Led by conservation authorities in South Africa, the agreement intends to protect and manage land in biodiversity priority areas.

First Riverine rabbit was dicovered in the southern area of Sanbona, further identification of species became possible with the assistance of Cape Nature.

Dubai World Africa assumes full ownership of the property, and Sanbona gets incorporated into the Shamwari Group.

Eyerpoort farm was purchased extending an additional 5 000 hectares of critial diverse landscape onto the reserve size.

Successful release of a population of desert black rhino [Diceros bicornis bicornis] are introduced onto the reserve.

Sanbona Wildlife Reserve is registered as a non-profit company and Sanbona Nature and Wilderness Reserve is established.

Today, the 58 000 hectares of Sanbona Wildlife Reserve bears little resemblance to those original Dutch settler farms. Since 2002 it has undergone a monumental transformation, as with time the landscape regenerates and restores itself. The ongoing efforts of the dedicated conservation team support this through methodical and scientific monitoring of the environment and the reintroduction of locally extinct animal species. While the land still bears some historic scars, it is already an Eden for rare and endemic plant and animal species. The clear and ultimate goal is to create a resilient ecosystem that can support animals that once lived on this uniquely enchanting landscape. And this is happening every day. 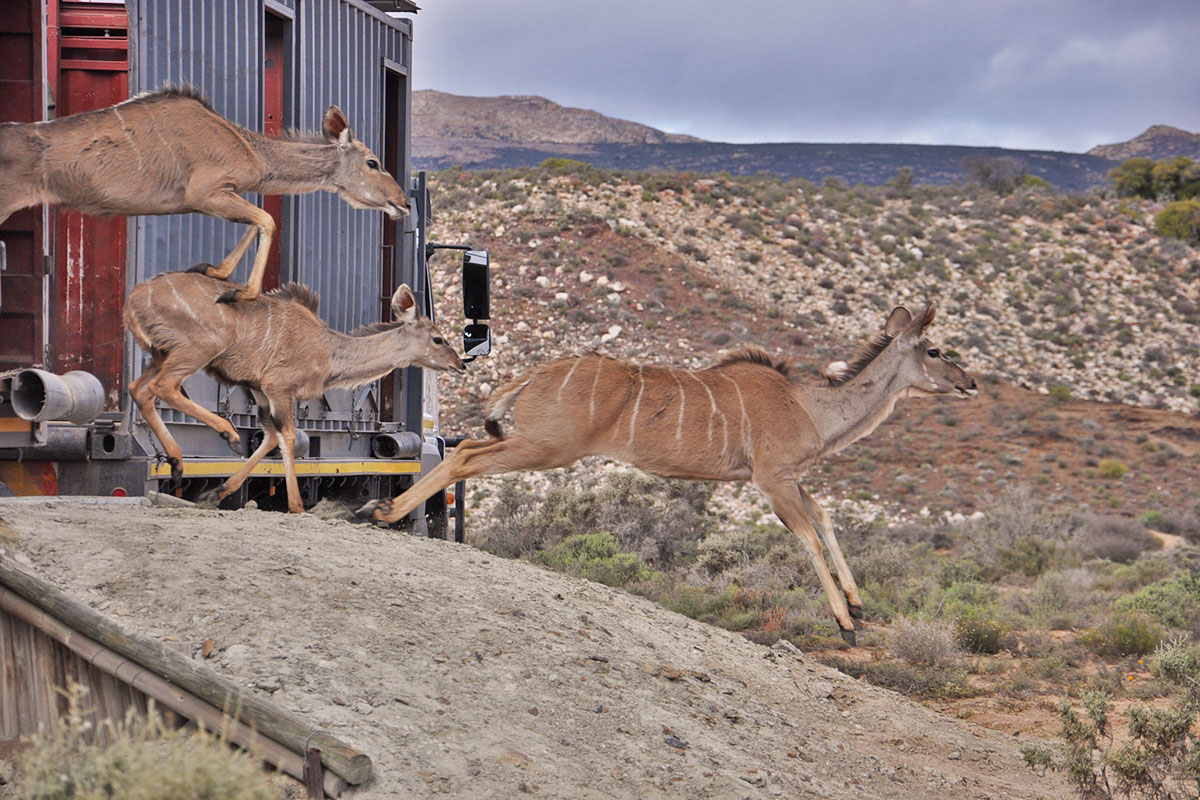